Puff pastry can be utter bliss or complete failure. It’s a miracle of flaky layers of dough and butter that will rise to impressive heights. Handle it wrong, and you get a doughy, greasy mess. In my time, I’ve made both.

*Some of the links below are affiliate links, meaning, at no additional cost to you, I will earn a commission if you choose to make a purchase. I only recommend products or services I use personally and believe will add value to my readers.

As is typical, I get the urge to cook fancy things when cooking for a lot of people under a tight deadline. While I tell myself I’ll practice at other times, I rarely do. So after a few months of watching The Great British Bake Off and with a holiday party coming right up, puff pastry is at the top of my list.

Until now, my go to recipe was from Martha Stewart. The Bake Off provides a fair amount of insight about where I’ve been going wrong; most likely I’ve been letting everything get too warm. Just to shake things up, this time I decided to see what I could learn from Paul Hollywood’s recipe.  Martha is a bit of a generalist, like I am, while Paul focuses on the field of baking. I was curious about how the two would compare.

Two more different recipes could not be written. Paul calls for a mix of all purpose and strong (bread) flour, European butter, eggs, and only a dash of salt. Martha uses AP flour, cream, plenty of salt, and doesn’t specify anything about the butter.

From the start, we’re dealing with totally different chemistry. Bread flour has more protein, giving the dough more strength and elasticity. Plus you have extra protein from the eggs. European butter has more fat and less water, which will also create more flakiness. On the other hand, Martha’s ingredients are easily accessible to the home cook.

The techniques also diverge greatly. Paul has you knead the dough for 5-10 minutes, creating a smooth, pliable dough with a lot of stretch. In contrast, Martha has you make a rough dough and cautions you not to overwork it. It was much more dense, could perhaps have used a touch more liquid, and I had to resist the urge to knead it to smooth it out. Kneading is also an important step in activating gluten, so I fully expect the two doughs to act differently.

And then the butter. Paul has you pound it into a thin sheet with a rolling pin. Martha has you beat it by machine, adding in a little extra flour during this step. The butter is then formed into a 5″ block. With Paul’s method you start with two fairly similar layers, both in texture and thickness. With Martha’s, you end up with a deep package of dough surrounding a block of butter. You’ll have to be a little more careful to spread out that block without tearing or damaging the pastry surrounding it.

Folding comes next. Paul’s method includes an extra fold in the first step, and then uses a “book turn” to create 4 layers in the next fold. He follows up with two single turns that create 3 more layers. Martha encases the butter in a single layer of dough, then has you make 6 single turns of 3 layers, 2 at a time. This risks letting the dough get too warm between turns, which is possibly where it goes wrong for me.

However, even though Paul’s recipe starts with more layers, you end up with fewer layers at the end because he makes fewer turns. The turns end up compounding the layers into greater and greater numbers. Paul gives you an early boost, and his 3 turns end up with roughly the same number as Martha’s first 4 turns. But that 5th and 6th turn take you from a couple hundred layers to a couple thousand.

There is also the fact that Paul deals in weight, and Martha deals in cup measures. Martha also loses a little butter to the mixer and paddle, whereas Paul keeps the entire amount contained between sheets of plastic wrap. Those small discrepancies can make a difference when you’re talking about reliability and performance.  Baking is a science, after all. It might not matter much to the home baker, but a professional needs to reproduce a recipe the same way every time.

Obviously, these two recipes are going to create totally different products. But which elements really make the biggest difference?

Since Martha’s puff pastry recipe makes almost twice as much, I decided to split it in half so I could see the impact of the butter a little more. I used European butter (Kerrygold) in one half and grocery store unsalted in the other half. So technically I have 3 pastries I’m testing out: 1) Paul’s as written, 2) Martha’s as written, and 3) Martha’s with European butter.

I’ll fully admit that I was biased in favor of Paul’s recipe right up until the first time I rolled it out. As I rolled, that thin layer of butter cracked and broke into small pieces, resulting in a dimpled dough with pockets of butter. This is not a good start to creating hundreds of layers of butter and dough.

Some areas broke into small chips of butter, while others were larger pieces. At every spot the butter breaks, it allows the two layers of dough to stick together. Instead of getting 3 new layers (dough, butter dough), you’re back to a single layer of dough. At best, this would create a pastry with very uneven layers. At worst, it won’t rise at all.

Martha’s recipe takes a bit of pounding with a rolling pin to flatten out before you can roll it. However, the butter smoothly filled the dough without any cracks.

I did vary Martha’s method slightly. She recommends doing three sets of two turns, but I found that by the 3rd turn the dough was too springy for that. It was taking forever to roll out, which also means getting too warm. Instead, I did 4 individual turns, which gave the dough time to rest in between.

So how do they measure up?

I cut a scalloped circle and a square from each dough. The squares were scored around the edge and pricked in the middle, like you might do for a tart or canapé shell. They all look fairly similar at this stage.

After baking, the results were dramatically different. Paul’s dough stayed flat, and was a bit chewy and crisp rather than light and flaky. Martha’s dough, however, puffed up to impressive heights.

You can really see the difference in this side angle. I can easily believe Martha’s puff pastry dough has 2000+ layers! Also, I need to be careful not to pinch the layers together when I’m cutting.

Paul’s dough was a flop, sadly. I suspect whatever happened with the butter is the culprit. I obviously need more practice to succeed with his method of thin layers. I could also try leaving the butter as a bigger block and using his ingredients with Martha’s technique.

Martha’s dough worked perfectly for me this time. It was light, flaky, and buttery delicious. The salt really makes the dough pop. I ate every one of those samples and would have happily eaten more, no filling needed. Flavor-wise I liked the European butter just a smidge more, but both were very similar and I probably wouldn’t go out of my way to buy it again.

However, it may have too much puff for some applications. If I did want to make a vol-au-vent or other canapé, that dough might actually give too much height and seems a bit uncontrolled in its rise. I would probably skip the last turn or two and see how it acts.

I’d be interested in trying it again to see the difference the eggs and kneading in Paul’s recipe really make. For now, I gave it another turn and popped it in the freezer to experiment with later.

I ended up using both batches of Martha’s dough for the party, turning them into some delectable British Sausage Rolls for my holiday party. The pastry is delicious and almost impossibly delicate – expect lots of crumbs as you eat!

*Note: if you can’t find British Bangers, this is a great recipe that covers how to make it in detail. In a pinch, you can do like I did and use 1 lb ground pork and add 1/4 cup panko or dried breadcrumbs, 1 egg, 1 tsp salt, 3/4 tsp black pepper, 1/4 tsp freshly grated nutmeg, 1/4 tsp ground ginger, and 1/4 tsp rubbed sage. Mix well. Cook about 1 tsp of the mix in a frying pan. Taste, and adjust seasonings if needed.

A Few of my Favorites:

Have you ever attempted puff pastry before? What’s your favorite recipe? I’d love to hear in the comments!

18 thoughts on “A Tale of Two Pastries” Hi, I’m Denise, the creator and writer behind Swellegant Life and Swellegant Design. This blog is a way for me to celebrate the little joys in life – growing fresh vegetables, cooking for family and friends, making things to brighten up my home, and traveling both near and far.

Join my newsletter for freebies, recipes, updates and more.

A few of my favorite things: 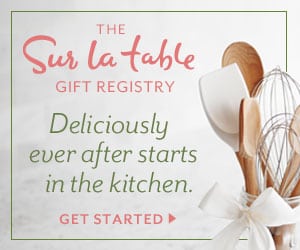